Travelers on our people-to-people Cuba programs sometimes visit the Miramar home of visual artist Maria Cienfuegos, where she showcases her work as well as that of other young artists.  Her artist-run cooperative, dubbed Studio 7 y 60 (or Septima Y Sesenta), has existed since 2010, when Maria and three collaborators decided to use her family’s apartment as a venue to present their creations directly to the public. 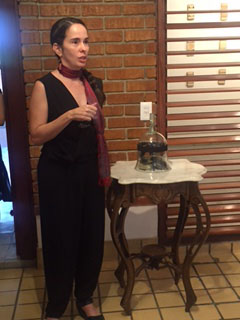 Much of Maria’s art explores the concept of memory. On her website, Maria, who has a background in biology as well as art, writes: “I approach my work from the hybrid sensitivity that arises from the mutual influence of art and science. My photographs emerge from the counterbalance between these two forms of operation, which I regard as complementary. Within this dynamic I am interested in the social/anthropological processes which traverse the categories of thought and image. It is my personal quest to go inside spaces of remembrance and forgetfulness. Photography is my way of not only adding and revealing layers to the process of reminiscence; but also of participating in this cryptic accumulation.”

On a recent journey to Havana, we captured these images of the artist and her studio space. Find out more about her artist-run space, Studio 7 y 60, here.You can also read an article about the studio on Cuban Art News.

To find out more about Academic Arrangements Abroad, one of the pioneers in offering legal travel to Cuba, visit our website. Since 1999, we have helped thousands of Americans discover the rich history and culture of this once-inaccessible nation.

Our president, Jim Friedlander, who has traveled to Cuba more than 50 times, has also created the Havana Heritage Foundation, which is dedicated to protecting and preserving the architecture and culture of Havana.  For more information or to make a tax-deductible contribution, click here. 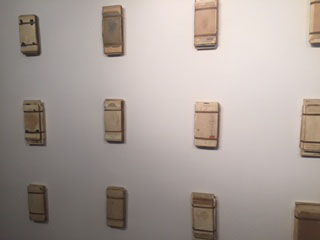 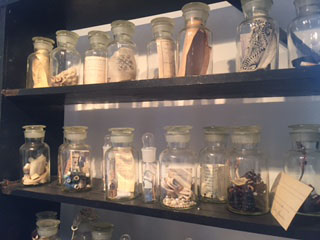 Is this Lewis, Shetland, or Orkney? Nope: It’s the island of Videy, near Reykjavik. And these are not millennia-old monoliths but sculptures erected in 1990 by Richard Serra.

Called Afangar (“Standing Stones”), this is a site-specific installation of nine pairs of basalt columns ranging from nine to 13 feet tall.

Serra was asked to create a public work for Reykjavik but found inspiration in the wild and rugged terrain outside the city. Extracted from a nearby quarry, the stones are carefully positioned in an area of this small (.7 square mile) island, spread out to elicit wandering and viewing from different perspectives in a landscape that includes water, a working harbor, plentiful bird life, tiny beaches, a great expanse of sky, and windswept grass.

Uninhabited since 1943, this island had a population that peaked in 1930 with 138 residents.  With archaeological evidence of settlement dating to circa 900 A.D., Videy has witnessed many changes. Over the years it has housed a monastery, wool mill, printing press, dairy farm, and fish factory. In addition to Afangar, now visitors find one of Iceland’s oldest stone houses (now a café-museum), its second-oldest stone church, and an installation by Yoko Ono called Imagine Peace Tower, a circular monument from which a beam of light sometimes projects into the sky. 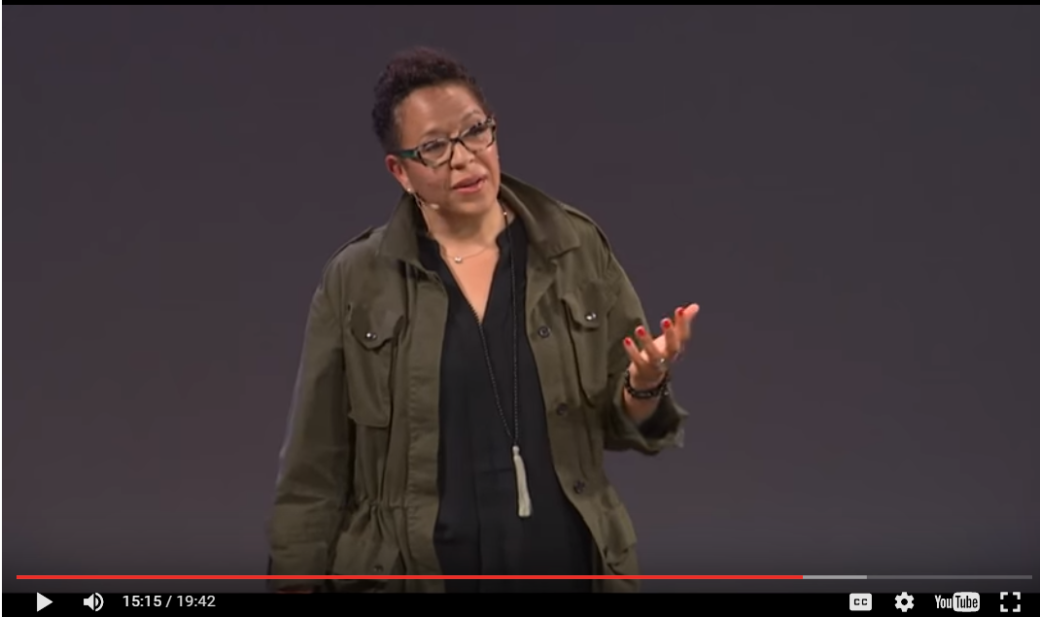 Don’t miss the chance to travel to Cuba this fall with Sandra Jackson-Dumont of The Metropolitan Museum of Art. Sandra, who leads The Met’s education programs, is known for her refreshingly non-academic lectures, which use pop culture elements like music and movement to engage non-traditional audiences. (Her signature “Teens Take The Met” events consistently draw thousands of young people — with no eye-rolling.) Even if you’ve been to Cuba with us before, Sandra’s approach will open a new window onto this intriguing Caribbean island. Watch her talk about Soul Train and impostor syndrome and learn more about the trip.

One of our most popular lecturers, Patrick “Paddy” Bowe is a Dublin-based landscape designer and architectural historian whose dry Irish wit and approachable manner have endeared him to hundreds of travelers over the years. Hear his riveting talks on local flora (he makes even weeds interesting!) on our upcoming Crossroads of Cultures and Celtic Isles cruises.

Discover the ancient wonders and modern complexities of Iran, home to 7,000 years of civilization, when you experience “Iconic Iran: A Journey Through Persia,” from October 20 to November 5, 2016. This trip of a lifetime features the landmarks of Tehran, Shiraz, and Isfahan (which Condé Nast Traveler describes as “a beautiful city of ancient mosques with elaborate mosaics”), as well as Persepolis and several less-visited destinations.

Here are just a few reasons to explore Iran with Academic Arrangements Abroad this fall:

1.) Nine UNESCO World Heritage Sites
Iran has an impressive list of 19 World Heritage Sites. On this program, visit nine of them, including the Golestan Palace Complex in Tehran and Isfahan’s spectacular Friday Mosque and Imam Square. At Pasargadae and Persepolis, explore the vast ruins of the palaces of the great kings Cyrus and Darius, and venture to the lesser-known sites at Bisotun, Choga Zanbil, and Shustar.

2.) Lecturer Christopher Lightfoot
Travel through millennia with this curator in the Department of Greek and Roman Art at The Metropolitan Museum of Art. A scholar of ancient history, Dr. Lightfoot has an in-depth knowledge of the Achaemenid, Parthian, and Sassanian periods in Iran.

3.) The museums of Tehran
Admire dazzling collections at the National Museum, the newly reopened Islamic Era Museum, and the spectacular Jewels Museum.

4.) A superb guide
Our experienced guide, Bahman Zenhari, has been leading tours for Arrangements Abroad since 2010. He and his colleagues work hard to make sure travelers experience the country to its fullest, whether this means sharing their knowledge of Iran’s history or buying local delicacies for you to try. 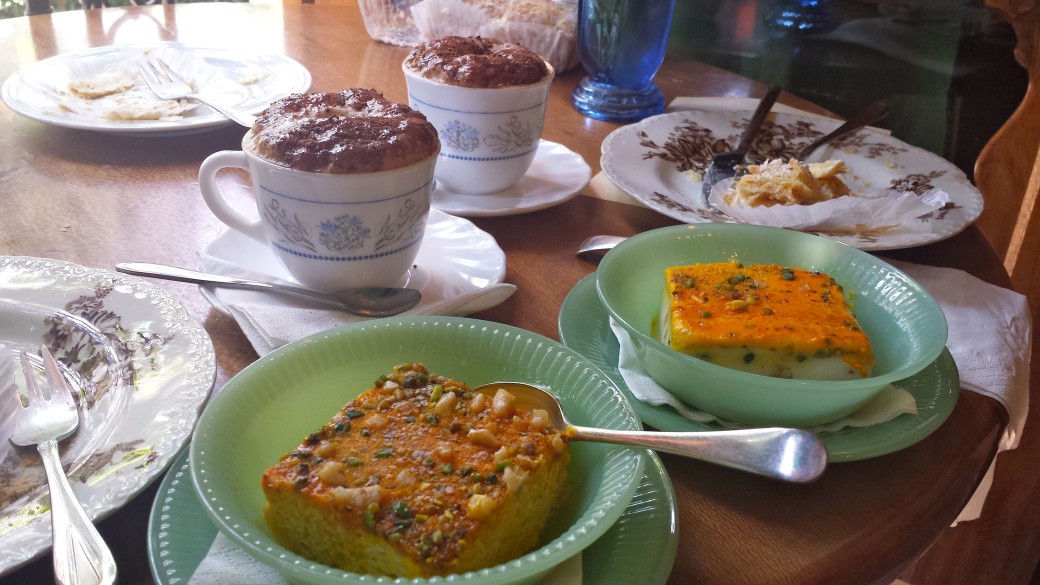 Move over, Rijksmuseum. Step aside, Barney’s Coffeeshop. These 6 unusual attractions will give you an insider’s look at Amsterdam most tourists never dreamed of.

If you have a fondness for felines, pussyfoot on over to this cathouse, created in honor of John Pierpont Morgan (the founder’s pet, not to be confused with the American fat cat). The Katten Kabinet, as it’s known in Dutch, is full of posters, sculptures, drawings, and paintings of adorable furballs.

2.  The Museum of Bags and Purses

Housed in a historic canal house, this collection of more than 5,000 items dates back to the 16th century and includes purses that once belonged to Madonna and Margaret Thatcher. (Fun fact: The oldest purse on display was worn by a man.)

Just next door to Amsterdam’s acclaimed Artis Royal Zoo, this museum is dedicated to the two-thirds of all life that is invisible — microorganisms too small to be seen with the naked eye. It’s teeming with fascinating information about these surprisingly beautiful creatures (our favorite is the cuddly-creepy tardigrade, or “water bear” — the only animal that can survive in outer space).

In 1969, John Lennon and Yoko Ono staged a week-long “bed-in” at the Amsterdam Hilton in protest of the Vietnam War. Today, Suite 702, where the couple stayed, contains photos, a guitar, song lyrics, and other memorabilia approved by Yoko herself. It can be reserved for about $2,000 per night.

Named for its founders, a team of father-and-son anatomy professors, this display of preserved skeletons, body parts, fetuses, and other oddities assembled in the 19th century is not for the fainthearted.

Far more palatable is this interesting small museum on the grounds of a turn-of-the-century municipal cemetery. The room with seven coffins illuminates the funerary traditions of the Netherlands’ diverse religions and cultures: Protestant, Catholic, Jewish, Muslim, Chinese, Creole, and Hindu; other exhibitions explore how we remember our dead and our emotions toward the final stage of life.

By the way, there are still a few cabins left on our Dutch & Flemish Landscapes cruise. It includes an afternoon at leisure in the Dutch capital, during which you may want to visit some of these quirky places.

Academic Arrangements Abroad, together with leading cultural and educational institutions, is proud to offer a diverse portfolio of exceptional trips. For additional information, call us at (800) 221-1944 or email trips@arrangementsabroad.com.

What could be lovelier than an April picnic amid fields of tulips? Last fall, the landscapers at Keukenhof Gardens in the Netherlands planted seven million bulbs for visitors to enjoy this spring (photo, above). They also arranged about a hundred thousand crocuses, tulips, and muscari into a mosaic showing a 17th-century sailing ship docked alongside gabled canal houses, representing the Dutch Golden Age (see below). If you stay on for the Amsterdam postlude on our “Dutch & Flemish Landscapes” cruise, you’ll visit Keukenhof for a picnic lunch, during which you’ll be able to admire this floral representation of Dutch cultural history.

The Metropolitan Museum of Art recently added two trips to its 2016 Travel with the Met lineup: On Hidden Treasures of Northern Italy, art historian Frank Dabell takes travelers off the beaten path to lesser-visited, historically rich towns in Lombardy and Piedmont this September. In October, you can join distinguished scholar and author Olivier Bernier to discover the Houses of the English Aristocracy–an itinerary that generated so much interest we added a second departure.

The Royal Yacht Britannia, formerly the property of Queen Elizabeth II, has been named Scotland’s best visitor attraction for the tenth consecutive year by VisitScotland, the Scottish national tourism board. Five million people from around the world have visited the Britannia in Edinburgh since she opened to the public in 1998. If you haven’t seen this beautiful ship—on which Charles and Diana spent their 1981 honeymoon—consider joining our Celtic Isles cruise in July.

This year marks the 60th anniversary of the 1956 opening of Joan Miró’s studio in Palma de Mallorca, Spain. The studio was central to the Spanish painter’s evolution as an artist and where he worked from age 66 until just two years before his death in 1983 at age 90. This eclectic space has been preserved exactly as Miró left it, and you can view it up close this spring on our upcoming Mediterranean cruise.

Jewels of the Western Mediterranean
May 11 to 20, 2016
With art historian Frank Dabell
and gardening author Patrick Bowe
Please click to view brochure