The Caribbean island of Trinidad bursts with color, but none is associated with it more than red.

The island’s official flower, known as the Chaconia, Wild Poinsettia and Pride of Trinidad and Tobago, emblazons small trees with long sprays of red flowers (or inflorescences with vermillion bracts, to you gardeners). The fact that it is always in bloom on the anniversary of independence from Great Britain (August 31) cemented its stature. 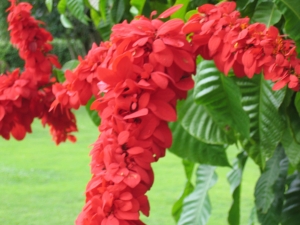 Also standing out from the crowd is Trinidad’s national bird, the scarlet ibis. This elegant bird begins as shades of gray and white but ingestion of crustaceans over time turns its plumage red. The ibis and Tobago’s national bird, the crocrico, are perched on the nation’s coat of arms. 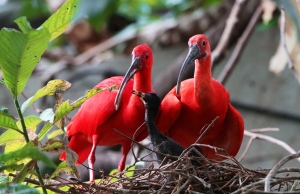 The sprawling Greek revival seat of Parliament, known as the Red House, was painted red in 1897 to celebrate the Diamond Jubilee of Queen Victoria.

Then of course there’s the flag, which is a red rectangle cut diagonally by a black stripe that is flanked by two white stripes. According to the nation’s Ministry of Public Administration and Information: “Red is the colour [sic] most expressive of our country. It represents the vitality of the land and its people; it is the warmth and energy of the sun…White is the sea by which these lands are bound…Black represents…the people joined together by one strong bond.”