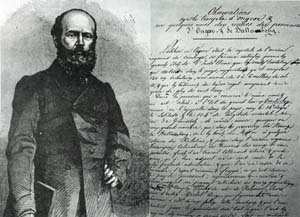 A fascinating man, Alexandre Henri Mouhot was a Greek scholar, a noted entomologist (a beetle, which he discovered, is named for him) and naturalist, an accomplished artist and a daguerreotype photographer.  He is however, best known for bringing the splendors of Angkor to the attention of the world with his posthumously published Travels in Siam, Cambodia, Laos and Annam. In great detail, he observed the site’s floor plan and architecture. He also drew maps and striking renderings of the magnificent temples, lush jungle and animals he encountered in the region. The interest and excitement generated by Mouhot’s book led to the French government’s leading role in the preservation of this world treasure.

Born in 1826 in a French town on the Swiss border, Mouhot was fluent in Russian, Polish and English as well as French. He lived in St. Petersburg, Russia, where he was a professor of languages and philology, and on the English island of Jersey, with his wife, a descendant of Mungo Park, the famous Scottish explorer.

Adventure was in Mouhot’s blood as well, as he set off alone to Bangkok, with the sponsorship of the Royal Geographical Society, to catalog zoological specimens and to document literally uncharted territory in Siam (Thailand), Cambodia and Laos.

In 1860, Mouhot wrote about the temples of Angkor: “…no one who has not seen them can form any adequate idea.” And he described Angkor Wat specifically as “erected by some ancient Michelangelo,” “grander than anything left to us by Greece or Rome.”

Not long after his time in Angkor, Mouhot died from fever in Luang Prabang, Laos, in 1861 at the age of 35. That he was someone who had found his true calling is evidenced in his writings:

“I have never been more happy than when amidst this grand and beautiful tropical scenery, in the profound solitude of these dense forests, the stillness only broken by the song of birds and the cries of wild animals; and even if destined here to meet my death, I would not change my lot for all the joys and pleasures of the civilised world.”