Fifty-eight temples is a lot for a city you can walk in its entirety without too much trouble. Royal capital of Laos for centuries and once part of French Indochina, Luang Prabang only opened its doors to travelers in 1989. Judging from the tourism infrastructure that has emerged in the time since (including recently erected Orient-Express and Aman hotels), they are building and we are coming.

Luang Prabang is a protected city though, so its exquisite golden temples and procession of monks who collect alms every morning at dawn will hopefully remain as they are and as they have been for centuries. UNESCO referred to Luang Prabang as “remarkably well-preserved” and “unique” in its blending of traditional Lao and French colonial architecture when the organization added it to the World Heritage List in 1995.

The city’s numerous temples and constant presence of monks contribute to its serene ambiance. Monasteries serve as schools as well as places of religious tutelage, so Luang Prabang is also a center of learning.

So not only is it beautiful, it’s also smart. 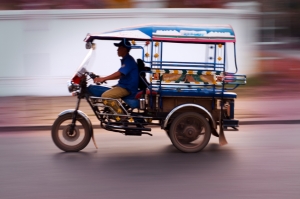 The following is a favorite quotation from the August 2011 Condé Nast Traveler article by David Ebershoff, “Loving Luang Prabang:”

“I usually don’t throw around the word fabulous, but how else to describe buildings decorated with mirrored water dragons, serpents tiled in colored glass, and hundreds—no, thousands, no, tens of thousands—of gold–leaf Buddhas?”