Many travelers know about Emperor Qin’s stunning tomb in Xi’an, China, protected by an army of 7,500 terra-cotta warriors and horse-drawn chariots. Fewer people, however, have heard of the Mogao Grottoes: hundreds of caves where, armed with a flashlight and sturdy shoes, you can discover detailed wall paintings and impressive statues—including a 113-foot Buddha—created over a period of nearly one thousand years. 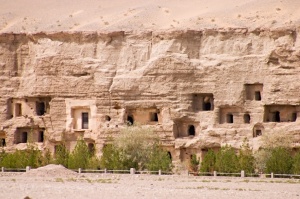 Nestled in the hills 16 miles southeast of the Silk Road oasis town of Dunhuang are 492 caves containing more than 54,000 square yards of murals and 2,000 statues. Depicting motifs from Buddhism and scenes from royal life, the artwork—much of it considered masterpieces—chronicles fascinating changes in style over nine dynasties. Rigid early figures give way to more realistic human representations with more lifelike features and greater movement.

The caves also once contained manuscripts, including the world’s oldest book: the Diamond Sutra paper scroll, dating to 898 C.E., which can now be viewed at the British Museum in London.

Created by monks as shrines where travelers could pray for safe passage on the Silk Road, the caves were often commissioned by wealthy citizens and rulers who wanted to demonstrate their commitment to Buddhism. During political upheaval in the 14th century the caves were abandoned, but not before monks protected many manuscripts and paintings by sealing them safely in a single cave. These thousands of historically and culturally rich documents weren’t rediscovered until the early 20th century.

No life-size terra-cotta warriors here, but the scope of the documentation of history and examples of art over a millennium certainly gives those soldiers a run for their money.